Video games are meant to entertain us, but there are times when they can really stress us out. Whether it’s a singular moment that grates or just the game in general that can really raise your cortisol levels, sometimes it all gets a little too much.

Without further ado, let’s take a look at some pretty stressful moments in gaming. These are in no particular order.

Disturbing The Witch in Left 4 Dead

Honestly, the first time I experienced a Witch I thought I had heart failure, and yes I know that sounds awfully dramatic. The Witch isn’t always easy to see. When you’re running around killing other zeds, it’s all too easy to accidentally disturb her. Once you do, that’s it: she’s on your tail. The Witch will hunt you down for disturbing her rocking, then leap on you, and completely incapacitate you unless other team members shoot her off. The moral of the story is don’t disturb a sleeping woman!

It’s almost cathartic that the N-Sane Trilogy has just as many, if not more, stressful moments as the original games. As simple as leaping from this boulder was it was a stressing moment in this classic game, in fact, it’s what made Crash Bandicoot, Crash Bandicoot. In addition to this, the levels had TNT boxes strewn amongst it, and in between boxes where you’d collect Wumpa fruit earning a 100 in a level would award you with an extra life. The choice of tactically hitting the boxes, to avoid death by TNT, was tasking but nonetheless enjoyable nostalgic moments for us elder players.

In the second installment, we saw the boulder replaced with a giant polar bear eerily grinning at Crash while he runs for his life. The stress of avoiding a gigantic arctic bear was complemented with delightful, death-inducing obstacles.

Not an actual build but a scary one to think of. Yeah, this little scrub of a Geomancer is one of the hardest carries to effectively play as. I generally enjoy micromanagement games but not micromanagement in Dota 2! It’s a completely different ball game, if you mess up you feed the enemy team gold and generally get flamed and reported firmly into low priority. Meepo’s ultimate ability ‘Divided We Stand’ introduces 3 other Meepos with their own health pool and mana pool. Essentially, you have to be pretty spot on with micromanaging.

Meepo is an extremely stressful hero, for me. There are even items that will add to the already crowded character; Manta gives the ability to add two illusions to manage for a short period, Aghs will permanently add a fourth Meepo, Helm gives you control of a neutral creep and a Necro book summons two other beings to control. Not that the last two are legitimate build items for Meepo, but my god imagine having to deal with all of that with Meepo being stressful enough as it is! 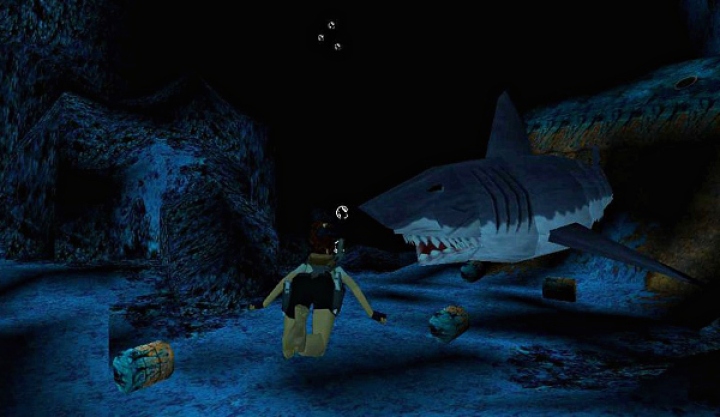 What was the most frightening in this level was how Lara was able to hold her breath for half an hour before hitting the area infested with sharks. Now, as a shark enthusiast I can see these a Great White’s (professional deduction there), well trying to be, they held the moving grace and reaction of a wet spud in a sink. The sharks were stressful to deal with as they had quite intimidating mouths, when going in to nibble on Lara. Let’s be honest, swimming in shark infested waters, when is that not going to be stressful.

Creative Assembly did wonders with this game, and to this day I have still not finished it and for very good reasons. Alien: Isolation is an insidious game which will keep you on your toes, to say the least, featuring similar traits as Outlast. You do not have the option of a weapon to fight your the lurking enemy. The game promotes stealth and the player escapes death by breaking the line of sight with the enemy. There is only one Xenomorph pursuing the player, thankfully, but one is enough for any player in this title. The player may feel they have outwitted the Xenomorph, the alien even walks away from you, where you are securely hidden inside a locker. Yeah, ‘secure’. Let’s not discuss the surprise vent visits.

Resident Evil 3 – Nemesis: The scariest thing in a skirt

The only shed of light I thought of, to get me through each time this toothy mutant turned up, is that fact part of his outfit consisted of a skirt. A monstrosity to look at, Nemesis stalked the player throughout the entire game, it legitimately felt like the longest boss fight ever. Fight with the Monster or proceed to the next area? Didn’t matter, he’d turn up. What was stressful was the actual mechanics of fighting, he was surprisingly nimble for a tank of a mutant. The chilling moment of hearing ‘STARS’ made my hairs stand on end when trying to navigate my way through to the next area.

This was definitely a stressing moment playing this in my younger days. You navigate your way throughout the maze, only to hear the most creepy sound I have ever heard in my gaming career “Get Out”. A timer then begins while a crosshair creeps onto the screen targeting one of the Kongs. Not as scary listening to it now, but it most definitely was at the time and the added stress of trying to escape added up.

From game mechanics, to tricky obtacles and simple jump scares there were my few select moments where I just wanted to pull the plug. What were/are yours? Let me know in the comments section below.