Excitement is growing in the gaming community for the release of the highly anticipated Spider-Man, exclusively on PS4. The superhero genre is massive in the movie industry with MCU dominating the scene with several Avengers movies and other subsequent titles. DC has also seen success with Christopher Nolan’s Batman movies and the fantastic Wonder Woman noteworthy entries. Either way, we are very much living in the superhero era.

So, what about video games? Similar to the game to movie transition, movies have not always transitioned very well. (Dare I mention Charlie’s Angels for GameCube?) Luckily for us, we have had some spectacular superhero games, and equally, some downright “what were they thinking” titles.

This feature looks at some of my favourite superhero games and some of the absolute stinkers, in no particular order

I understand the idea of trying to capitalise on a successful film with a game release, but honestly, who allowed the cat out of the bag with this one? From its poor camera to frustrating combat controls this adaptation was dead before it was born. It appears that development concentration went into replicating Halle Berry’s appearance from the movie, and that shows when you see the rest of the game (point and case in the image above).  Thankfully, the character of Catwoman has seen a better iteration in the Arkham series in later years.

Catwoman was a diabolical film and an equally diabolical game, probably one Halle Berry has removed from her memory. And probably one that talented voice actress Jennifer Hale wishes she could remove from her CV.

Neversoft gave us what we hadn’t had before; comic book style and power into a well-crafted video game. In this charming game, players can do whatever Spider-Man could do in the comics. We were limited to linear levels, unlike the more open-world games we have seen over the years, but this wasn’t a bad thing for the game. The levels, it seems, were designed to really emphasise the use of Spider-Man’s powers: web-slinging, wall crawling, web shields, web tangles, web balls and other fighting styles from the superhero. It was structured so that you fight waves of enemies with an end boss to the level. The game boasted a real “who’s who” of Marvel’s villain arsenal, which kept these levels all the more interesting.

Although Spider-Man’s reaction to control input could be a bit eccentric and camera work was off at times, overall it was a charming, comic book romp. And, probably one of the best, first 3-D visualisations of our favourite web-slinger.

No, no not that Superman game, but it does seem the Man of Steel doesn’t fare well in the gaming universe. There were genuine attempts at integrating Superman’s abilities into the game, including flight (at various speeds), freeze breath, x-ray vision, heat vision and invulnerability, but it still wasn’t enough.

Yes, Superman is indeed invulnerable in Super Returns, but Metropolis isn’t, and so comes its first problem: mission variety. Even though it’s an open world game, it fails to have any key villains or foes he would usually face. Instead, he mainly fends off natural disasters and Metropolis losing health. The final boss fight – a giant tornado – leaves you with a “that it?” feeling. There’s not even a final showdown with Lex Luthor, despite him causing the caped hero some issues in the game.

This Superman outing is probably not the worst of a bad bunch, but execution let it down. I sincerely hope that one day Superman gets the game he deserves.

A golden oldie that never really gets the praise in retro reviews that it deserves. Probably one of the first games I played through as a kid, and my go-to game for a challenge when I booted up my SNES. A simple, side-scrolling beat ‘em up that followed the story of the 1992 movie, of the same name. What made this gem great is that the movie to game transition did pretty well here, being a best seller in the UK. Notably, Batman Returns had an insane amount of ports making appearances on the NES, SNES, Sega Genesis, Lynx, Sega-Mega CD, Amiga, and so on. Probably more ports than enemies! Batman goes on to have an amazing game series with Arkham, but this little gem will always resonate with me.

This game has quite a sad story, namely that it helped usher in the closure of development studio Silicon Knights. It was reported that there were a lot of background politics attached to the development of X-Men: Destiny, which inevitably affected the product and resulted in another panned superhero game. It is a shame because the premise of this title, executed well, could have been a great hit. The game gave you the choice of three new mutants, and you can then slowly develop their powers and special abilities. Unfortunately, the ‘powers’ were repetitive and uninspired. Shame.

One of the most popular Hulk games to date. The point of superhero games is to make the player feel like the hero and Hulk, let’s face it, is probably one of the most fun ones to have control of. The endless destruction in-game brought praise for this title and provided endless fun as the green beast!

With the exception of Superman 64, Aquaman generally has had the poorest representation in both film and games. Generally, as gamers, we hate water levels; they’re not fun even when executed correctly. Aquaman: Battle of Atlantis, therefore, didn’t really stand a chance! Flawed swimming controls and repetitive enemy fights left more than a salty taste in our mouths.

Sorry, I’ll see myself out.

DC Universe Online is a free-to-play MMO game, in which the player creates their own original superhero or villain. The landscape of the game is beautifully crafted, especially if you pick a flying hero/villain. Amongst this lovely scenery is, of course, the fun fighting system. Even though simple to learn it is certainly not boring to watch and surprisingly feels good on your controller too. Missions can become a bit bland; kill a bunch of stuff and do this is pretty much what they consist of. For my money, picking a villainous character can make them a bit more fun. Overall, DCUO gives us an authentic taste of the DC Universe and working under DC legends like Superman and Batman is pretty fun.

In recent years, Batman has cemented an excellent reputation in the video game community with the Arkham series. However, there was a darker time for the Dark Knight when Batman: Dark Tomorrow released on GameCube and Xbox in 2003.  Riddled with cumbersome controls and a hideous inventory system, Batman: Dark Tomorrow was also lumbered with a mish-mashed storyline. It begins with Batman focusing on a gang war, then the Joker kidnapping Commissioner Gordon, and then Batman must stop an Eco-Terrorist from flooding the world. Its attempt at the grainy, dark mood that Gotham oozes in the comics is done well, and Batman’s cape has great animation, but that’s about all of its plus points. All cape and blundered camera controls make Batman a sad man.

I am probably in the minority here, but I honestly enjoyed the Deadpool game. Cheeky like its movie counterpart, Deadpool provides raucous hack-n-slash fun and doesn’t take itself too seriously. It’s a type of game that is never going to win a GOTY and other awards, but there’s no denying its enjoyment. Don’t get me wrong, I had moments where I wanted to fling my controller at the wall because of unresponsive inputs during fights, but other than that it was a blast. 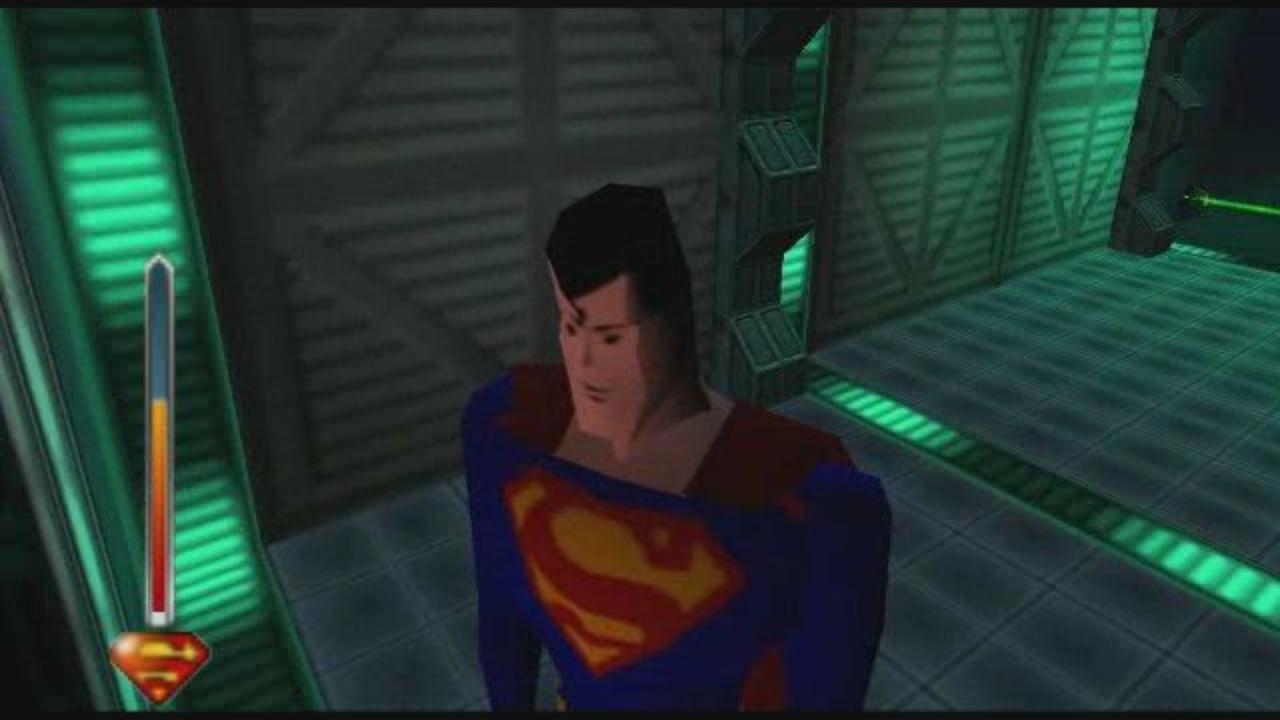 Yes, you knew it was coming, but I omitted it from the above list because this game is simply the best at being the worst. Superman 64 is a legend in the gaming community and wider. I think Superman’s face in the image above says it all really.

An honourable mention must go to the Lego franchise; they have produced many superhero games, and they work well because of their simplicity. They are simple, wholesome fun games that can be enjoyed by almost anybody. The combination of not taking themselves seriously and, well toys, makes them a great success.